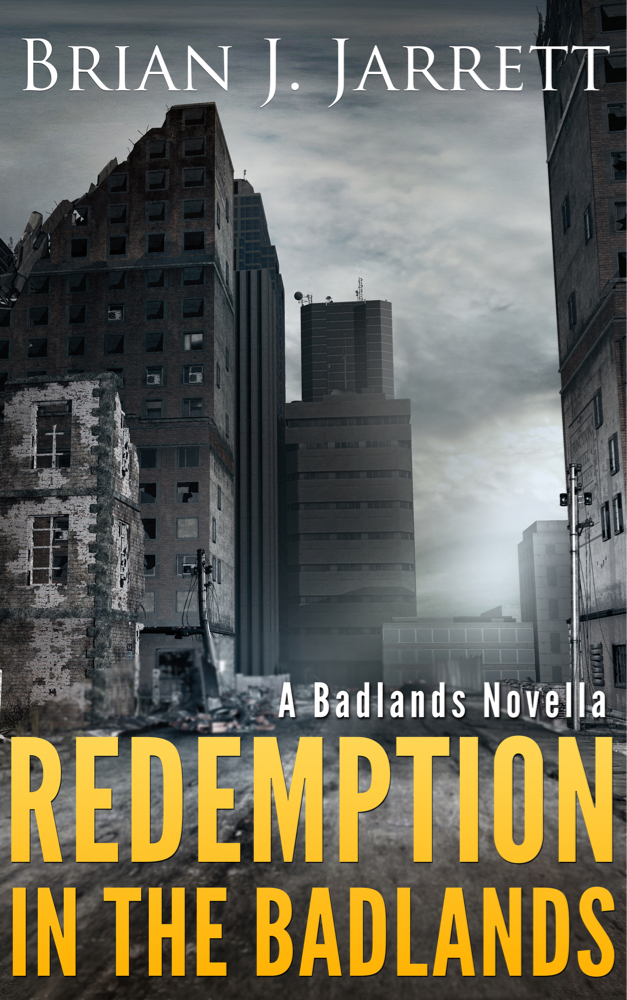 Redemption In the Badlands

All rights reserved by the author.  No part of this publication can be reproduced or transmitted by any means without the written consent of the author.

This book is a work of fiction.  Any names, people, locales, or events are purely a product of the author’s imagination.  Any resemblance to any person (either living or dead), to any event, or to any locale is coincidental or used fictitiously.

For Jim Carcia. Thanks for the inspiration.

Dan Owens cruised the ruined streets of his town, searching for victims of the plague, infected or not. He didn’t need many supplies these days; the old public school building he’d adopted as his home had been well-stocked by others before him. He sometimes wondered who they were and what might have befallen them. Why they’d abandoned their home, leaving behind their weapons and supplies, he supposed he’d never know. He had a hunch, however, that whatever happened to them wasn’t good.

Sometimes it was hard to remember that there was still good in the world.

But he had found the place, and it could only be a gift from God. Dan Owens, “Pastor Dan” as he called himself these days, maintained an unconventional relationship with his God. In the days before the virus, no mainstream church would have ever formally ordained him. But now with most of the world’s population dead—killed either by the virus or the zombie-like monsters the contagion created—it didn’t matter what the establishment said.

There was no establishment anymore.

It had been a couple of months since he’d last seen anybody outside of the infected. They had a lot of names; deadwalkers, carriers, deadheads. Dan mostly just referred to them as carriers. Poor unfortunate souls who had no natural resistance to the mysterious virus that had swept the world several years back, decimating humanity.

The pair he’d met had been a young man, probably in his twenties, traveling with an older man in his forties, around the same age as Dan. The older man, Ed, had been separated from his family and the younger man, Jasper, was helping to reunite them. They were good guys, and after a pleasant evening of conversation over a bottle of Jack, Dan sent them on their way with some supplies and well-wishes.

He wondered whether or not Ed ever found his family.

Dan had saved the two men from a mob of hungry carriers. When he brought them back to his place, Ed and Jasper had been surprised by what they’d seen. It was odd, even by Dan’s standards, but callings from God didn’t always make sense. They didn’t have to. Sometimes the reasons were simply beyond human comprehension. Dan’s particular calling happened to be rounding up the infected and quarantining them inside the old football arena built on the school grounds of his current home. There he kept them behind a sturdy fence while the steep walls surrounding the arena’s playing field proved too difficult for the carriers to scale.

Over the last year, he’d collected an impressive number of infected souls. A frightening number. Ed and Jasper had been surprised that he simply didn’t put them down, but it wasn’t Dan’s role to play executioner. That was up to God to decide when their time had come. So he penned them up in the arena, keeping the streets a little safer for what few survivors remained. He tossed the carriers venison whenever he could, along with any squirrels or rats he happened to catch. The rat population shrunk along with the human population, but more deer were running around now than he had bullets for.

He’d watched the infected, noting their behavior patterns. Sometimes he thought he watched them a little too much. Over time, it became apparent that they were changing. Not all of them, but a fraction of the carriers seemed to be getting smarter while their counterparts slowly withered away. The more intelligent of the group began working together in packs, searching for a way out of Dan’s prison and eating the weak to stay alive. He had to admit that it worried him a little, but he always checked the perimeter and the gate, ensuring that his keep remained secure in their permanent quarantine.

But then, a week ago, he noticed something strange.

At first, he didn’t know what he was seeing. He thought that maybe one of the poor bastards had expired and was quietly rotting away in a corner. God knew it wouldn’t help the stench. But after a few more days, Dan noticed a couple more of the odd-looking sacks lying around. His interest piqued, Dan got in his reinforced truck, strapped a deer carcass to the back and drove inside the mass of the walking dead.

In other words, a regular feeding run.

As he carved out his path through the infected, he pulled up beside the gray sacks he’d seen from afar.

This time he got a better look.

But he left with more questions than answers.

That night, as he blew out the last candle before bed, a frightening thought occurred to him.

The carriers were indeed changing. Transforming the same way a caterpillar becomes a butterfly. The mass of spongy tissue he’d seen was a cocoon. Dan couldn’t be sure of it, but his gut told him he was right.

His gut also told him that whatever emerged from that cocoon wouldn’t be anything like a butterfly.